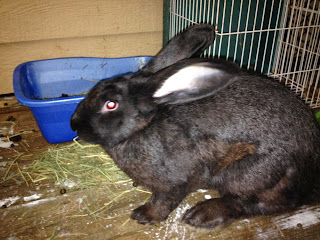 Linc’s ultimate deception worked and he prepared for his escape, but the aroma of tender salad greens proved too tempting. He calmly grabbed mouthfuls of salad and munched as the door closed and the human left to bandage his wounds.
Posted by Moosep and Buddy Rabbit at 4:50 PM