Leaving on a Jet Plane

Southwest Airlines ran a special on tickets. Hubby couldn't stand the idea of riding in a car all the way to Maryland to get the rabbits.

He’ll fly up and get the hotel room. I’ll drive up and will transport the rabbits back after a night or two in the hotel.

It looks like this is happening.
Posted by Moosep and Buddy Rabbit at 5:51 PM No comments: 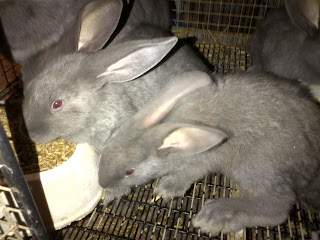 They are on solid food now, but still like a little milk from Mom.

I’ve been checking prices at Amazon for baby bunny foods, but think I’ll talk to the breeder before getting it. Don’t want to change brands and maybe upset their diets.

We are toying with the names Blink and Link. Hubby came up with those after seeing the latest pictures. 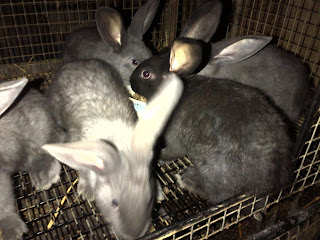 Works for me, but it might sound too much alike for the bunnies. We’ll discuss.


Posted by Moosep and Buddy Rabbit at 5:44 PM No comments:

I Happened Upon A Deer


Until Thursday, I never knew that deer made sounds.

Thursday was a warm day, the warmest so far this year.  Having a touch of spring fever, I took off early from work to go with a buddy bike riding.  Raleigh has such nice greenways and they give us city dwellers much needed time to commune with nature.

We were on the lower end of the Crabtree trail near Laurel Woods when a bird’s nest caught our attention.  We heard some young birds fussing for food and saw Mom darting into the nest to calm their racket.

Across the creek, a woman was walking in the brush along the edge.  She started to call out, not to us.  It became obvious that she was calling her dogs that had wandered too far away.

We went back to our bird watching when we realized that both the calling from across the creek and the barks of the dogs had changed their tones.  The dogs were running, yelping and growling.  The underbrush was rustling with the new activity.

The woman began to yell the dog’s names and new phrases.  “Stop!  Get off!”  She picked up a big stick and was swinging it at the dogs, which was no small feat since she had her other arm in a bright blue cast.

That’s when we heard it, a bleat similar to a goat or sheep.  It was the sound of terror and pain.  It was a wild animal sound that I’ll never forget.

A lady from a nearby apartment came down to the trail.  She heard the commotion and recognized the bleat that we didn’t.  “A deer,” she said.  “I remember that sound from living in Maine.”

We called out to the woman across the creek.  She was pulling the dogs away and was attaching the leash she had been carrying.

“The dogs ran up a deer,” she called.

We called after her to see if the deer was hurt and to get her name, but she took off quickly through the ticket not saying another word.

We backtracked down the trail until we could cross to the other side of the creek.  We found the thicket of briars, wild roses and brush.

Lying there was the young deer.  It’s leg broken, bone protruding through the thin flesh; a hunk of meat missing from the rump and another from the neck.

It tried to stand, to run away.  Instead it hobbled and crashed into the creek.  The lady, a nurse, rushed into the cold creek and held the deer’s head out of the water to keep it from drowning.

The 911 operator was patient with us as we tried to describe where we were on the bike trail.  This was no easy task given that there aren’t many identifying markers in the woods.

We explained that we were near the Golden Corral headquarters on Glenwood.  That’s where the animal control officer parked when she got there a little later.

By this time another walker had joined our little group.  He supplied a yellow, plastic poncho that the animal control officer and the lady from the apartment managed to get under the injured deer.

Forming a human chain, we passed the injured animal up the creek bank, but once we were on dry land, the officer gave us the bad news.  The deer was too far gone and too badly injured to try to save.

She said as we carried the deer to the officer’s truck that she would go to a vet’s office where the deer would be humanely euthanized.  She wouldn’t suffer too much more.

With a heavy heart I walked back down the trail to my buddy and my bike.  My only thought by this time was not of the injured deer, but of the woman with the cast.

She had thoughtlessly allowed her dogs to run free, attack one of God’s creatures, then committed the worst sin of all, by leaving the injured animal to suffer and die.

I wonder if she was able to sleep that night.  I know I didn’t.

Posted by Moosep and Buddy Rabbit at 2:28 PM 1 comment:

They are Getting Bigger by the Minute 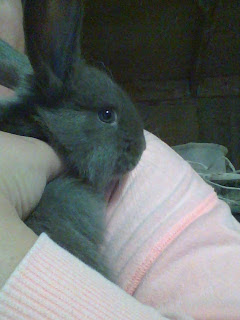 A bit of time has passed and the bunnies are now about four weeks old.

They are looking more adult and are already as big as Buddy was. I’m guessing that they are about a third of their adult size now.

been reading about the Flemish Giant rabbits and the articles we’ve found say they are gentle and very laid back. 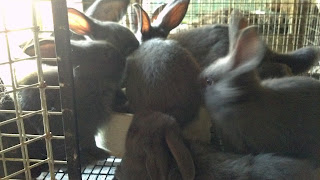 We hope they will snuggle on the sofa with us while we watch TV. Buddy used to do that & was very happy as long as the volume on the TV was a little low and we kept rubbing his back.

It’s a very relaxing way to spend the evening.

Posted by Moosep and Buddy Rabbit at 5:40 PM No comments: 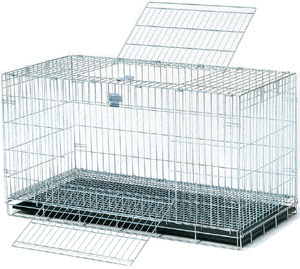 We have a security system with motion detectors. The rabbits would set the alarm off if not confined during the night.

But these are going to be big bunnies; about the size of a small breed collie.

We are thinking about buying four Wabbitat pens and joining them together to make a really large pen. They would be fully carpeted to make sure they don’t hurt their feet. We’d put two end to end; taking out the end panels and roof. We’d stack two on top; removing the floor. That way the rabbit could stand up. They’d be 74 inches long and 38 inches tall with a carpet floor.

That should work shouldn’t it? Pictured is a single unit.
Posted by Moosep and Buddy Rabbit at 5:34 PM No comments:

And on the Eleventh Day 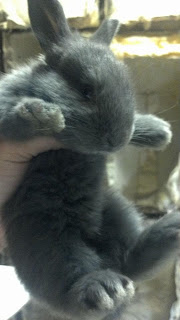 At about eleven days, the eyes are open wide. The buns are looking around at the world trying to understand what they see.

They are nursing and growing quickly. They change so fast at this age.
Posted by Moosep and Buddy Rabbit at 5:20 PM No comments:

A One Week update 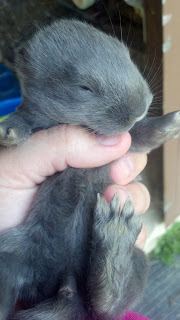 An update on the new bunnies. They are growing so fast. It’s been about a week and eyes are beginning to open a bit.

It’s amazing to see the progress. We’re feeling like new papas and really anxious to bring them home. But we know we have to wait.

They have to start eating and get well established on regular food before they can come home with us.

We are talking about a pen for night time sleeping. Don’t worry, they will run free in the house all day; that is right after we get them litter box trained.

Posted by Moosep and Buddy Rabbit at 5:15 PM No comments:

Moving On with Baby Steps 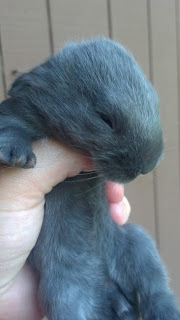 I haven’t been on here is a while.

Somehow, we thought it fate that we were supposed to get one of those rabbits.

She normally doesn’t sell to the public but only to other breeders in the Flemish community.

But she made an exception for us. We committed to getting two bunnies from that litter when they are three months old.

It’s tough to wait, but we know it’s meant to be.

Posted by Moosep and Buddy Rabbit at 5:10 PM No comments: