The Italians are Coming


Got caught behind an enclosed car carrier poking down a narrow city streets. It was a big truck pulling a large, completely covered trailer big enough to hold two maybe three cars.

It was moving so slowly that I could read all the signage:  "FERRARI" in three foot tall italic letters along with the company's horse logo and a tag line; "The Italians are Coming."

Another logo on the rear to make sure that even if one couldn't see the contents of the trailer, one would know for sure that there was a fancy car, probably more than my annual salary being delivered to someone.

The truck's driver gave a right turn signal; reconsidered; then moved slowly  further down the narrow street. Another signal at the next street; and again, the driver moved on. Finally at the third street, he signaled again; pulled the big truck into the left lane and tried to make his turn.

Traffic was blocked in both lanes, he struggled to make his turn. He tried and backed up. Tried again as traffic began to really pack into the street. He finally gave up and roared off with the engine of the big truck voicing the driver's frustration.

I guess some guy's mid-life crisis will be delayed until the driver can arrange a different method of delivery.
Posted by Moosep and Buddy Rabbit at 11:48 AM 1 comment: Links to this post


I started making garlands to go down the railing of our stoop. I measured out the backing material & laid it out on the floor before attaching lights & ribbon. 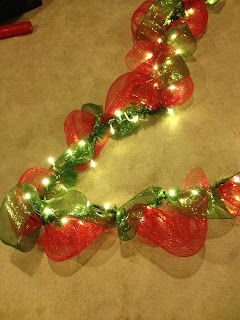 Posted by Moosep and Buddy Rabbit at 6:54 PM 2 comments: Links to this post


Posted by Moosep and Buddy Rabbit at 6:52 PM No comments: Links to this post